The old village of  Séquere  is situated in the village of Trévillach at 670 meters of altitude. resting on granite, it is positioned on one the peak of the plateau. On the west side, it dominates the valley of "col des Auzines" until the depatement of Aude, we can see also the Bugarach mountain. At the est side, Força Real is visible as well as the sea. South side we can see the Canigou mountain.

The only buildings remaining from this village is the ruins of the Saint Vincent's chapel, the sheepfold (probably the presbytery), the "castle" and in the South of these buidings some walls and foundations 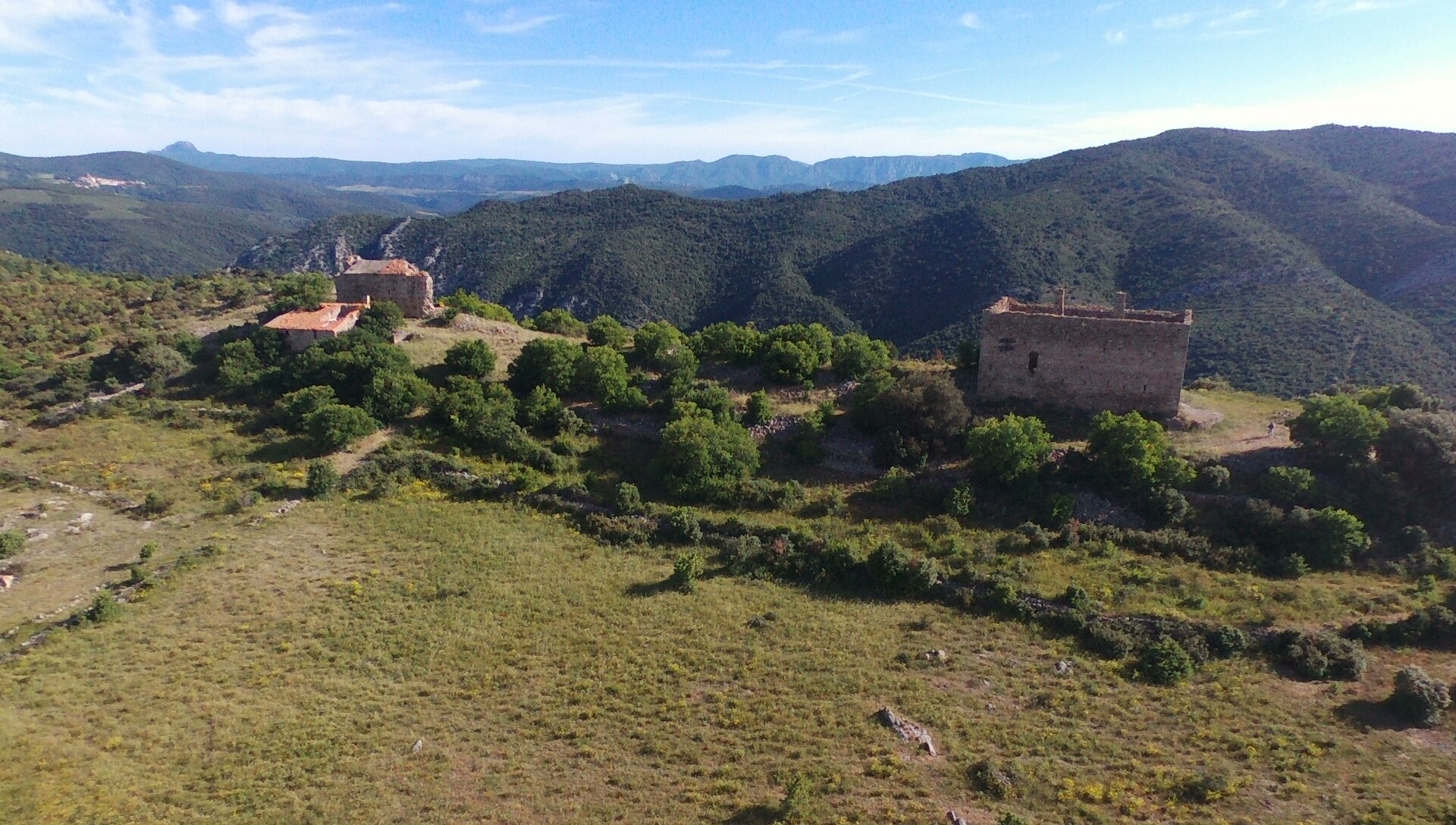 Video of the plateau : click here (Please use subtitles.)

The Saint Vincent's  chapel and its presbytery: The village of Séquère has been mentionned for the first time in 1011 in a papal bull addressed to Saint Michel of Cuxa abbaye. The plateau and the village are mentionned during XI, XII, XIII, XIV, XV th centuries. In 1410, Pere Punsich mentionned that  Bernat Berenguer de Perapertusa is lord of Roquevert, Trévillach and Séquerre.

The chapel is made with one unique nave orientated est-west, 18,2 meters long, 7,2 meters wide.  The west side has a platform, which was accessible before by a small staircase (stollen...). The entry is on the south side. Different elements of its architecture (blueprint, windows, roofing..) show that it is a roman chapel of the XIIth century.

Until the end the XXth century part of statues were visibles, the inhabitants of Trévillach have decided to move them in the cemetery where they have disapeared...

3D animation of the chapel in its actual state:

The chapel have been restorated th the late 70's, you can read some articles by clicking here (sorry in French)

It was a private property but the municipality is retreiving the ownership and give the management to the association via an an emphyteutic lease.

Inside the chapel as if you were there. Rq: depending on your browser (Internet Explorer or Android device) you may have display problem: In this case change browser, wait a few seconds to recharge the images or refresh the page)

The sheepfold (probably the presbytery) is a building of 8 x 10m on two levels, very close to the chapel. Private property, used as as sheepfold during many years, in poor state as well...

The castel :  Fortified farm, parallelepipeded rectangle of 13 meters by 20. Height of 10 meters approximatly. The construction dates back to the end of the XII th century or beginning of the XIII th century. Inside the castel two stange pillars, named "demoiselles" by the inhabitants of Trévillach. It has been destroyed by Spanish companies during the Forteenth century. 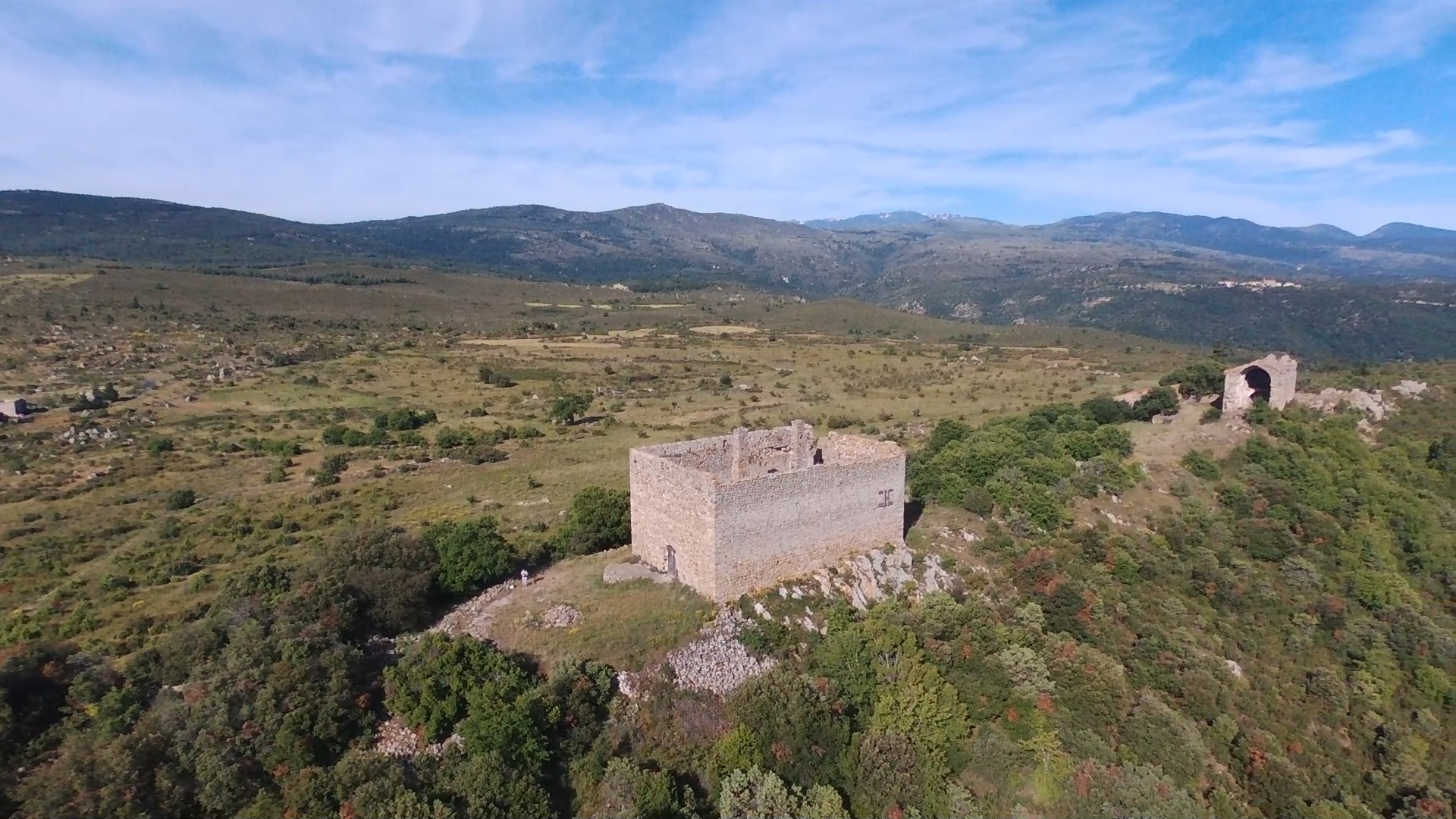 Other photos of the site on this page.

Panorama west side of the chapel: 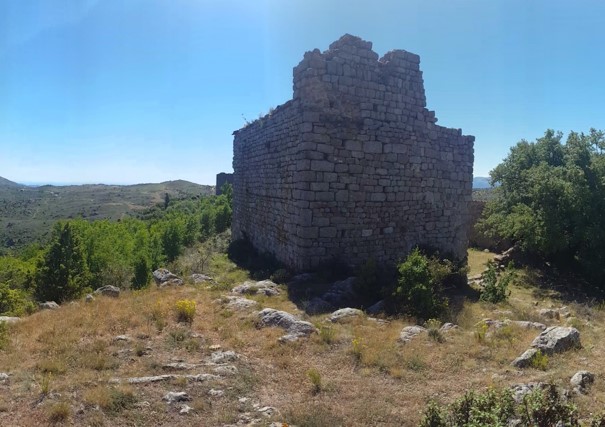 Panorama est side of the chapel:

- By foot: Park at the "col des Auzines" (D2 between Trévillach ans Sournia), then take the track nearly facing the parking. Allow one small hour waking without any difficulties. Avoid strong winds, hot or fog conditions. Chapel and castel are visible from the start, just follow the track

- By car: Take the D13 between Tarérach and Trévillach, the take the road on the right coming from Trévillach mentionned "Séquere". Continue during 2 kms approx, turn left before the house beneath the chapel, then right, then park and continue the 300 last meters by foot.

! BECAREFUL ! Do not leave anything, respect environment. The chapel is at a risk to collapse, it is fordidden to go inside.